This blogpost comes with free investment advice likely to quadruple your money, but you have to read the entire thing and its long!

I drove out of Spokane,WA exactly three months ago on a motorcycle with a freshly repaired engine case. That takes either a lot of trust in a mechanic or an extremely optimistic worldview. We now find ourselves more than 4000(check?) miles down the road in Bacalar, Mexico so I suppose sometimes the optimism helps.

Backing up to where Rachel left off in San Cristobal. We had a false start out of town one day on our way to Villahermosa. We chose Villahermosa as a default destination because the highway between San Cristobal and Palenque (where we wanted to go) had been reported as a dangerous stretch of road with a lot of robberies. As we left SC to ride the scenic road to our default stop, the motorcycle was again running very hot and on the twisty mountain roads with slow speeds and steep inclines we were quickly overheating. Frustrated, I pulled the bike over and had a temper tantrum while Rachel watched on. We decided to try to push on anyway but in my frustration I missed a turn and we wound up a little over an hour off course. The day had been slated to be one of our longest of the trip, and after the heating issues and the misdirection we both decided to return to San Cristobal and regroup. On the way back, we stopped at a vista and had lunch and had to laugh at ourselves- clearly we were not supposed to ride that day. The ride did take us through some very scenic indigenous areas so we were both happy to have ventured out into the mountains even though we wound up back at the same exact Airbnb we had just left!

My mental health counselor suggested a day off from thinking about motorcycle engine heat, so we had a fun day in San Cristobal- my highlight was eating a fig they preserve in syrup. It was the sweetest thing I can remember tasting and so good! We set out again for Villahermosa a couple days later, this time not through the scenic mountain road but along the highway. Rachel woke up with another round of food poisoning symptoms but thought she could tough out the journey anyway. By hour three of the ride, she was in full fever mode and the temperature outside was over 90F. It was miserable to watch and no doubt orders of magnitude more miserable to endure, but there weren’t options for cutting the day short. We made it to Villahermosa and recuperated for two nights. Villahermosa (Beautiful Village in Spanish) is said by some locals to be “The City of Two Lies”. At 300,000 people, it’s not a village and it’s not beautiful! Can’t argue.

At this point in the journey we were gearing up to ride east toward Tulum. We intended to split this into two days, but both would be long. Rachel wasn’t 100%, and we were both feeling road weary and wondering just what the heck we are doing this for anyway. As we sat in the hotel lobby waiting for the temperature to drop in the afternoon I could tell we were both dragging our boots. Not only was our strategy of waiting till it cools off not working (again), neither of us was excited about our next couple stops. Rachel suggested instead we head up the West side of the Yucatan Peninsula and then cut over. This immediately felt so much better, so we quickly canceled our intended hotel, booked another and hit the road toward the coastal town of Ciudad del Carmen. There is something about being on the water that we are both drawn to. If we are traveling through a city that we view as a stop on the way to somewhere we want to be, being on water makes it so much better.

We continued to Campeche, a small colonial town further up the Yucatan coast. Its pastel buildings and still-standing city wall were gorgeous as we rode in just before sunset. Still feeling some road-weariness the week before we enjoyed two restful days here and booked a short trip to Merida to follow. On the way we stopped at a wonderful Mayan ruin site called Uxmal. It was only an hour out of our way and there were very few people there. It felt serene to walk around the large site without thousands of other tourists or hawkers selling their wares. I know they’re making their living, but it can cheapen the feeling of awe when someone is blowing in a jaguar noisemaker. I don’t totally understand the noisemaker thing, but in Mexico at a few ruins sites, they blow these terrifying noisemakers that sound like someone being tortured. Apparently they sound like Jaguars. I’ve never heard a jaguar nor someone being tortured in person, but I’d bet the noisemakers are closer to the latter. 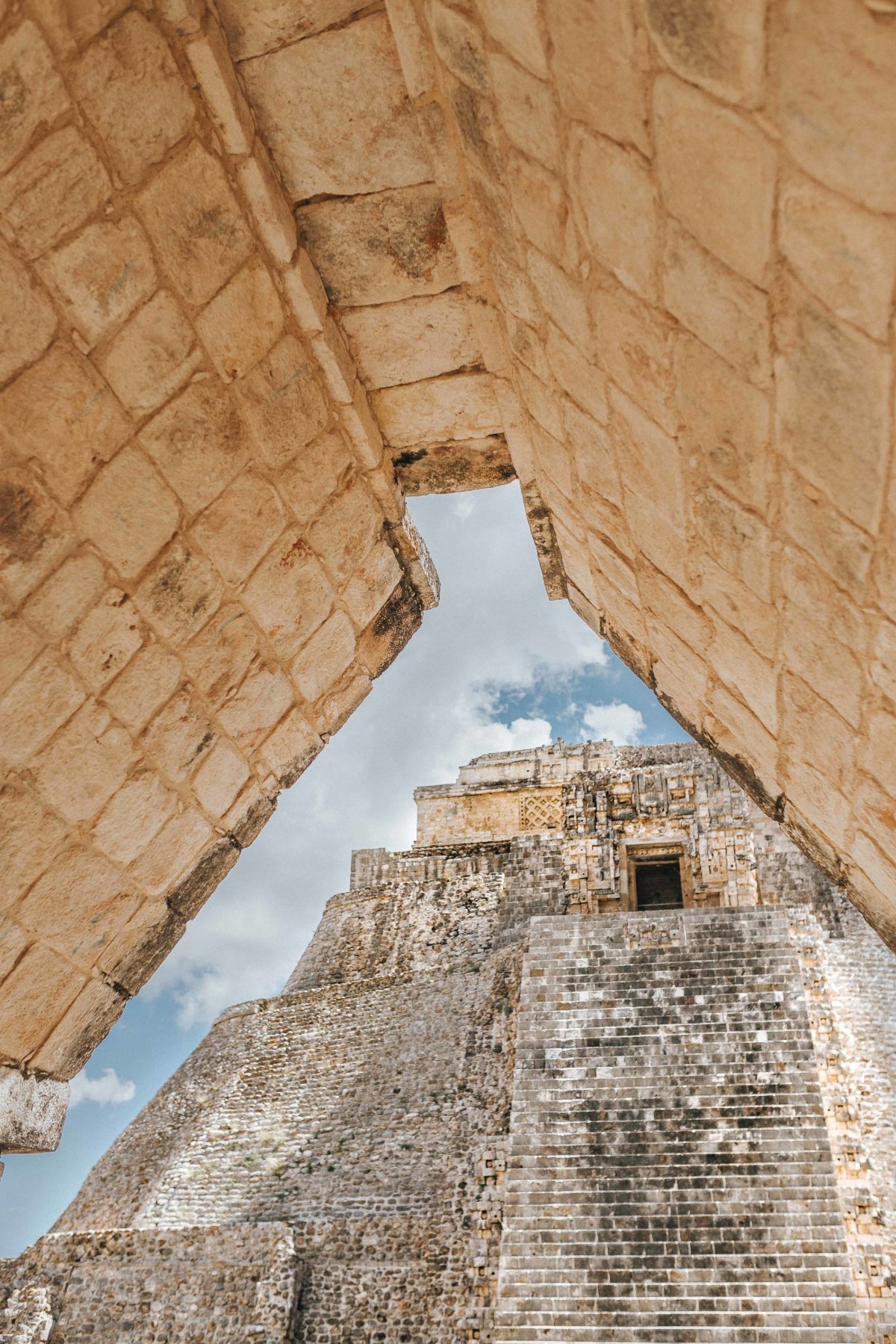 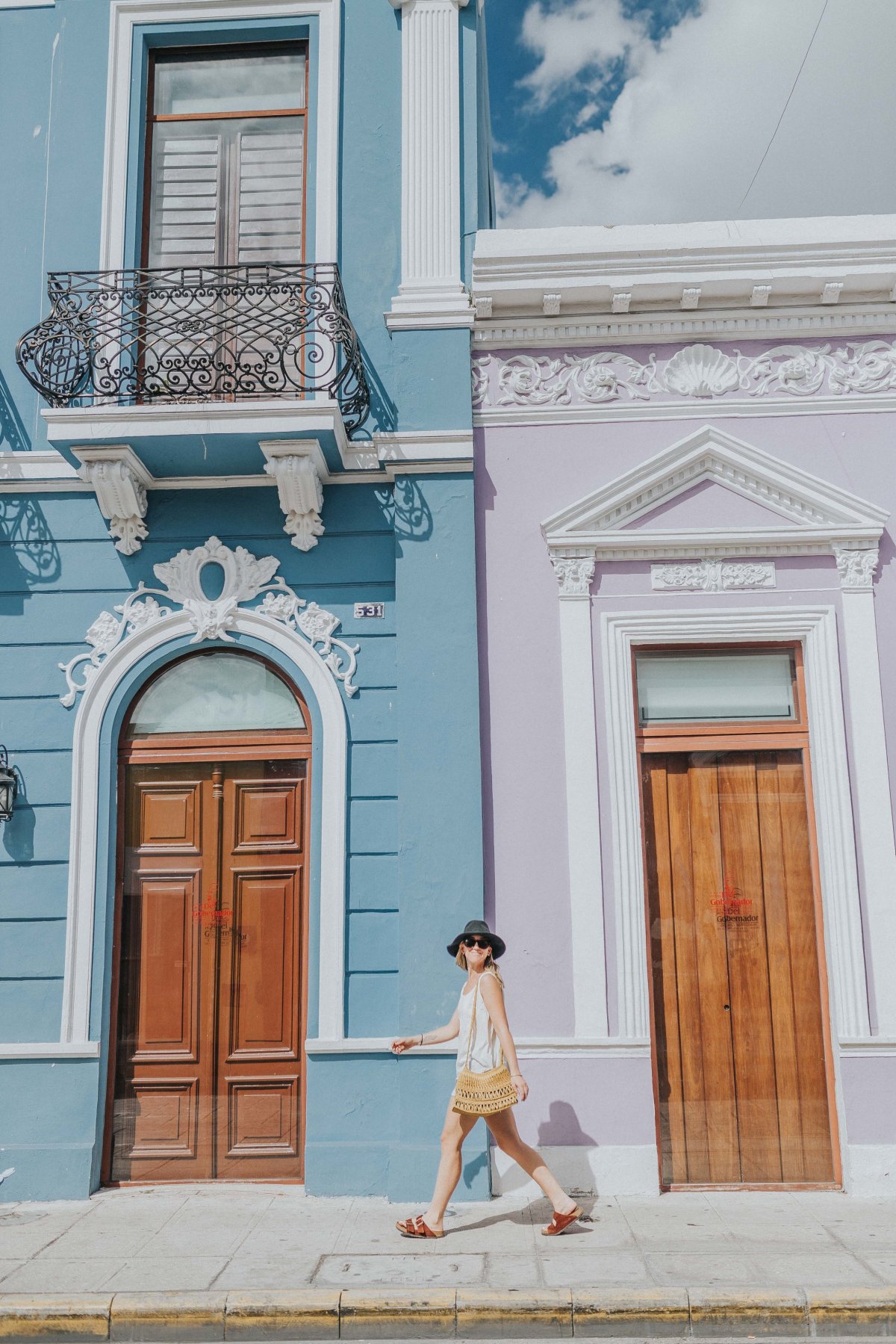 We had heard mixed things about Merida from different people and we wanted to see if for ourselves. I think we both came out with mixed feelings of our own. There is a large expat retiree community in Merida, and I’m told a big art scene although we didn’t see that. It’s not on the water, but the water is about an hour away. One thing we have noticed about this trip is we can be jaded by our previous city when judging a new one. If a person only visited Merida after flying into Cancun a few hours away, it could be a wonderfully authentic Mexican town. If that person rode their motorcycle from San Cristobal, they might be less impressed. I have nothing bad to say about Merida, it is a great spot to see a lot of ruins nearby, but I don’t think it would be my first retirement location.

Tulum was our next target, and a place we had heard good things about before we left the US and continued hearing along the way. Tulum is often compared to Sayulita on the West side of the country and we could see the similarities in culture, but they are also very different. The town of Tulum is about 4 miles from the beach, and we wanted to be near the beach but accommodations down there were well out of our price range. We located a bungalow across the street from the beach. It came with free breakfast at the vegan restaurant at the hotel, so we took a risk on another “bungalow” and booked it. After booking we read a warning about noise all through the night from the adjacent bar and jungle bug in the bungalow, but we nervously held our optimism. We lucked out! The bungalow was perfect for us, a studio with a kitchenette and outdoor shower, and importantly, wifi. We settled into Tulum life on the beach, getting sunburned and partying with honeymooners. While gorgeous, and full of nice shops and great restaurants Tulum was priced similarly to prices in the US and we recognized how spoiled we’d become when our glasses of wine at a restaurant were $10. Each!! 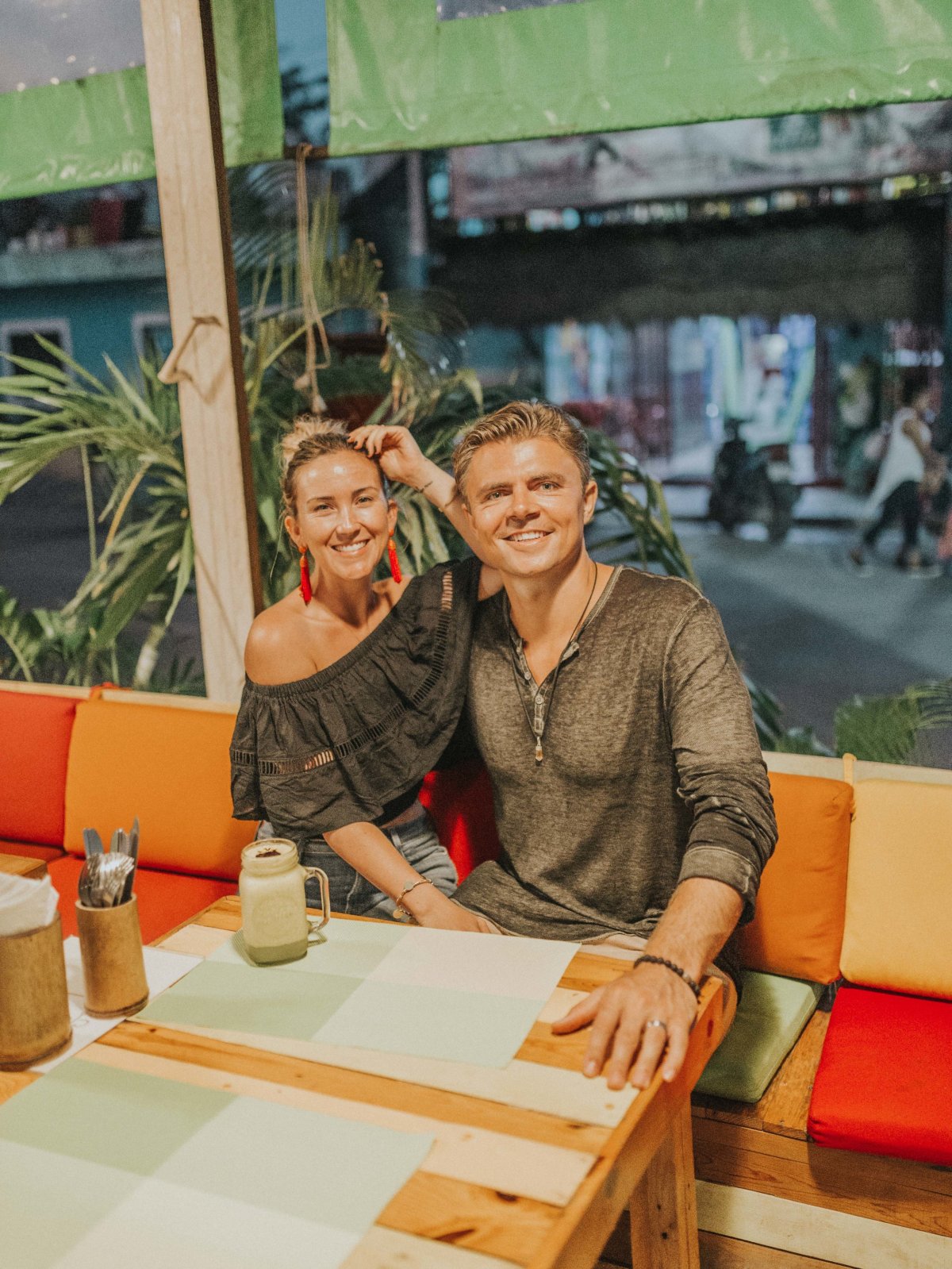 For Valentine’s day we’d booked a hotel with free Hotels.com rewards an hour north in Playa Del Carmen. We did everything we could to cancel and stay in Tulum but it was non-refundable so we decided to make the most of it. On the way into town, at a stoplight I tried to weave between a coupe cars and hit someone with our left pannier. I pulled over, glanced at Rachel and went back to the car looking for damage. I had just clipped the mirror, and the driver waved me away saying it was no big deal. (I’m PRETTY sure that’s what she was saying..)

We had a great dinner at a vegan restaurant and enjoyed our hotel stay. In the morning I went up the street to move the bike around the corner so we could load it, and a police car turned on his siren as I turned the corner. He told me no helmet was a ticket and asked for my license. Which was in the hotel. I was just going around the block! He informed me that was a ticket as well. I apologized profusely, and he didn’t look like he was going to budge. I jumped off the bike, and told him I would walk it to the hotel about 20ft away. He reluctantly agreed and for the first time I was very happy to be pushing a massive motorcycle down the street.

We rode back to Tulum and down to the beach for another smoothie bowl, and Rachel got her hair touched up by her stylist. (Yes! Rachel has a stylist in Tulum! She has them all over the world, she is glamorous after all!) The appointment took a little longer than we expected, and we hopped on the bike toward Bacalar knowing it would likely get dark before we got there. The sun did what was expected to do, and predictably we rode the last 45 minutes in the dark. We really haven’t done that at all through Mexico and I don’t recommend it, but it was pretty cool to ride through the smaller towns at dusk while the locals were hanging out at their taco stands and drinking beers together.

Since we got to Bacalar in the dark, we didn’t see the lake until this morning. It is a stunning combination of blues depending on the depth and our hotel was right on the water. We are going to spend a few days here getting our things in order and making sure we are ready to cross the border into Belize. This will be our final Mexican city, and let me tell you it is a spectacular way to wrap up a country. Bacalar is not yet developed massively like Sayulita and Tulum. It’s not on the coast, but the lake is better. After we left Sayulita and people kept saying “you should have seen it 15 years ago”, I’ve been on the lookout for the “next” hotspot. Bacalar fits the bill better than anything else I’ve seen, so invest now!