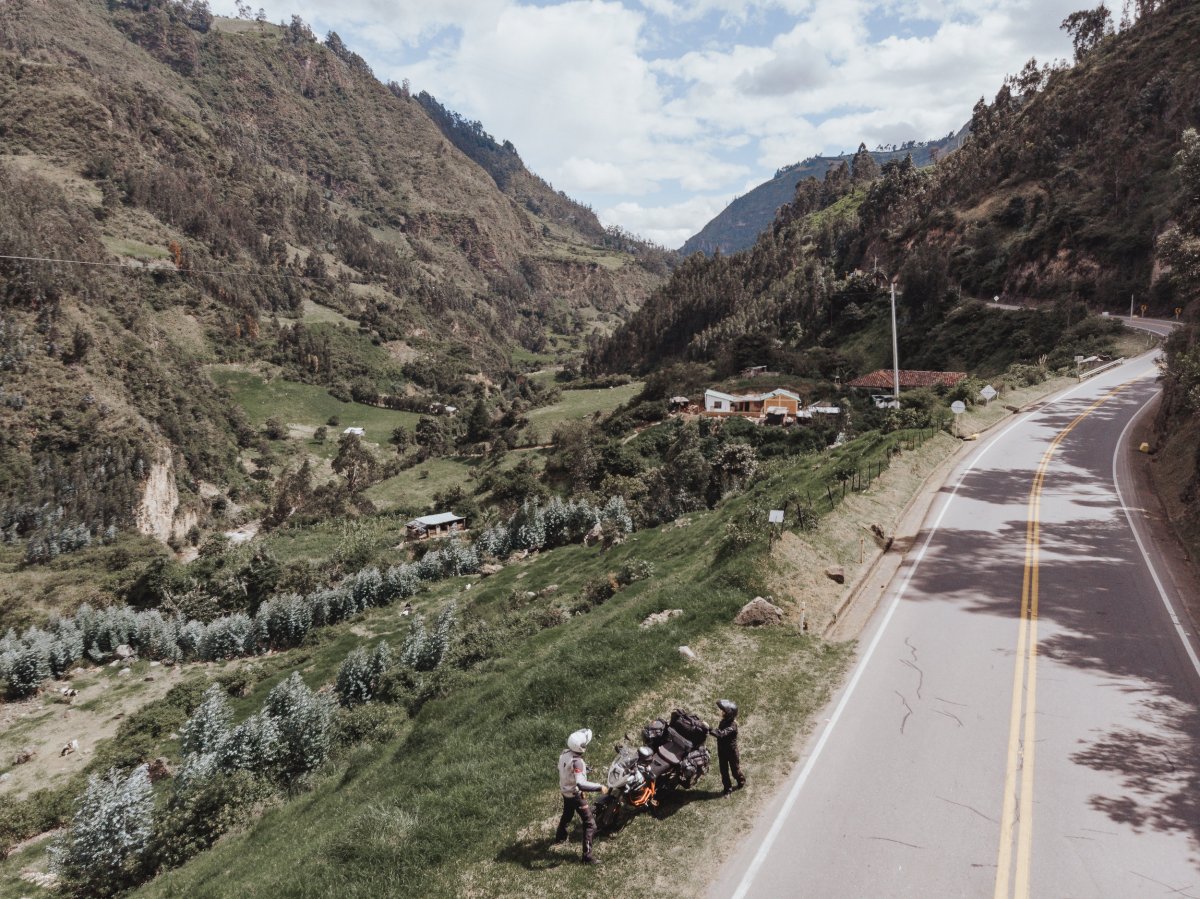 I wish I could say I was “in the zone,” ready to write awesomeness and divulge the last two weeks of our travels with color and zest. Alas, I am not, and I have been doing everything but writing since I said I was going to write this blog post three days ago.

We are currently in Salento, Colombia. We visited Salento five years ago, when we bought tickets to Colombia on a whim. Returning to a city is comforting. The familiarness breeds a sense of belonging, which we often lose track of while being on the road.


We were nervous coming to Salento, as the buzz surrounding this quaint coffee town indicated it had become overrun with tourism. We’ve seen many small towns along our travels where tourism has hit like a tornado; where we can imagine that once were quiet coffee shops and serene views are now lines of souvenir shops, loud bars, and dreadlocks galore. We feared the Salento we remembered would be gone, and it would have lost it’s charm that drew us in five years ago.

Bogota and Medellin didn’t seem to change a bit. We started in Bogota, the capital. A giant city of brown buildings, sky scrapers, and enough people and square footage to fill 10 Manhattans. Our first time around, we dismissed Bogota as a big dirty city, and jetted out of there as quickly as we could. We spent several days there, trying to give the city a second chance. We are so glad we did. The small neighborhood of La Candelaria where we stayed was bustling with young college students, travelers, and locals. Vibrant murals took the place of graffiti. Restaurants kept lit by candlelight. Live music flowed freely, and so did the booze.

After Bogota, we decided to head north before cutting west to Medellin. We had heard great things about the district of Boyoca: charming colonial towns, mild weather, and untouched by tourists. Villa de Leyva was just that. With nothing more than a giant square at its center, Villa de Leyva made good on the promise of its district. We only heard one English speaking person in our three days there.

Our mantra heading into Colombia was to “Slow down, take our time, and trust that everything that is supposed to happen, will.” In the past, we may have skipped a spot like Villa de Leyva, or considered it a “stop over.” We likely would have bypassed Boyoca and the northern districts all together, as they weren’t theoretically on our southern-bound route. But we chose to slow down, take our time, and head north.

After a visit to a winery and incredibly built clay home, we headed further north to Barichara, a small town in the district of Santander. This town was beautiful. High sloping streets cascaded downhill into the main square. Here, we watched the Easter processional, which I’ll admit I didn’t quite follow. Nonetheless, we enjoyed a quiet respite in this quiet town, preparing ourselves (not well enough, I might add), for three days of riding in a row.

I didn’t realize that to get from Barichara to Medellin we would have to traverse tropical heats and humidity again. Nor that there would be few if any cities to stop in for more than a day. I had a doctor’s appointment in Medellin that I was hoping to make (don’t worry mom, I’m ok!), and as such we needed to ride three days in a row.

The heat was overwhelming. We were riding in 80-90 degree weather. Most places we stopped were not tourist destinations—for locals or foreigners. Finding food we could eat was difficult, and we ate a lot of fried plantains, french fries, and rice. Our hotels were basic: sheets for covers, no windows and no hot water. I understand these are luxuries that Josh and I are lucky to have on our trip. I do. And I am beyond grateful for them, and the privilege to travel in the first place. But after riding in the heat, eating like crap, and talking to no one but my helmet and my husband for three days, I had no ounce of gratitude in me. I was angry. Irritable. A pure joy to be around.

I was so miserable on our third ride day that I started to shut down. Physically and emotionally. I felt depressed to my very core, for no reason at all. I was so angry with Josh. He hadn’t done anything, but I hated his guts. My body felt so beaten up. Tired. I just wanted a vegetable, a hot shower, and place to go other than a dark hotel room. Our ride to Medellin—our last day of riding—was one of the most beautiful we had seen thus far. But I could not enjoy it. Instead I had a pity party inside my helmet, population one. At one stop, I sat on the ground in silence. Josh asked me to talk to him, and I started crying and shut my helmet over my face. I flipped the sun visor down inside my helmet so I could really hide. (If you can’t see them, they can’t see you, right?) I just wanted to escape into nothingness and wake up when it was all over.

When we arrived in Medellin, the familiarness calmed me. I was relieved to see that not much had changed. The neighborhood we were staying in, El Poblado, seemed identical to how it had been five years ago. Our hostel was beautiful. Miguel greeted us at the front desk with a big smile. Our room was enormous. With a view. And hot water. This was enough to open up my heart enough to see the damage I had done on our ride that day. I told Josh I wanted to talk about what happened, why I had acted how I did, and how we could move forward.

That day we talked for hours. We had to take a break in the afternoon and return to the conversation later that night. There seemed to be more to talk about than just the bad ride day. About how my mental health was affecting Josh. Whether I could handle riding as much as we were. Whether he could handle the fact that I might not be able to. We talked at length. It was painful, scary, and I thought for the first time in our relationship that we might not make it.

I realize the challenges I presented earlier don’t seem to line up with a discussion of this caliber. But the culmination of times when I have struggled so deeply after ride days, the times Josh has felt paralyzed with uncertainty of how to help me, the moments where we feel frozen and unable to communicate with eachother, add up. None of these times are or were signs of a relationship falling apart. They were moments when each of us faced intense personal challenge, and the other was challenged with channeling empathy and support.

The amount of internal growth, change, and deep work that has happened to each of us as a result of this trip is immeasurable. Going through it is painful, and at times I want to give up. Not only am I going through my own growth, but I am watching my partner, the person I love most in this world, go through it to. I am watching him feel pain as he faces parts of himself he’s never met. I am supporting him as he discovers truths within him he didn’t know. And he is doing the same. Feeling all of it, digesting all of it, all the while holding me while I swallow my own evolution.

In my life, there has been no greater challenge to how I see myself than travel. This trip is a cataclysm of growth, change, breakdowns, heartbreak, disappointment, euphoria, and self-discovery. In a pressure cooker. Without a place to call home. In a foreign place. And the most immediate, safe, and comforting outlet to process it all is my partner.

So, the discussion we had in Medellin was inevitable. As will the future discussions I know we will likely encounter. And they are a part of the growth. They are the part that reminds us to be kinder to eachother when we’re feeling the growing pains. To remember that we have other outlets and support systems, and its ok to lean on them too. To build up our communication skills and make new ones when they break down.

After that night, we booked eight days in Medellin. We reminded ourselves of our mantra, and decided to really stick to it. We spent a week finding a routine, checking in, moving our bodies, writing gratitude lists, reading, and exploring the city. At the end of the week, we felt rejuvenated. Slowing down was paying off.

We headed south to Jardin next. Jardin is a colorful colonial town about three hours south of Medellin. It’s difficult to get to, and as such there are mostly local tourists and the occasional western traveler. We enjoyed the quiet nights, the bustling square, and the muy fuerte coffee.

The ride from Jardin to Salento was berserk. The first two hours were on a narrow gravel road, complete with pot holes, mud slides, and cliffsides. Josh and I prepared ourselves for the ride: I created an intention for the day (have fun, find joy, and be bliss!) and Josh planned to be present, slow down, and remember there was nowhere to rush to. We had a great ride on a day that in weeks past would have sent me into a mental spiral.

Now, we are enjoying the quiet familiarness of Salento. Gleefully soaking up the square that hasn’t changed a bit. Visiting restaurants where we’d dined five years ago. Tomorrow we plan to take a coffee farm tour. Slowing down feels good. Understanding our lives are forever changing because of this trip is ever present in our minds. And Colombia is just as beautiful as we left it.